Nell Irvin Painter’s title, “The History of White People,” is a provocation in several ways: it’s monumental in sweep, and its absurd grandiosity should call to mind the fact that writing a “History of Black People” might seem perfectly reasonable to white people. But the title is literally accurate, because the book traces characterizations of the lighter-skinned people we call white today, starting with the ancient Scythians. For those who have not yet registered how much these characterizations have changed, let me assure you that sensory observation was not the basis of racial nomenclature.
Book Review - The History of White People - By Nell Irvin Painter - Review - NYTimes.com
Posted by Sabrina Gledhill at 14:43 No comments:

A Game of Chess, by Adam Isler 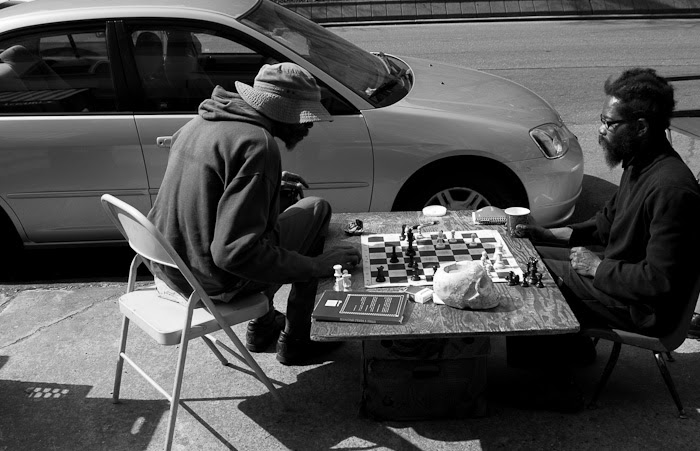 While Morris was trying to build his men's self-esteem, the War Department was quietly considering creating an all-black paratrooper unit. Morris soon found himself with a new job as the top noncommissioned officer for the new unit dedicated to training America's first "colored" parachutists, the 555th Parachute Infantry Company, or the Triple Nickle. They decided to spell it differently from "nickel" to make sure people knew they were unique. The unit had plenty of doubters.
"They didn't think colored soldiers had the intestinal fortitude to jump out of a plane in flight," Morris remembered.

Flash of the Spirit - a very special homily

The desert has little mercy. But plenty of sun unlike a winter day in Chicago when the grayness is so pervasive it seems to invade even our souls. It was on such a day I found her in the quiet library at the University of Chicago, a perfect expression for all the changes taking place in my own life at the time: the whirlwind Oya.
And with her I discovered the rest of the Yoruba Pantheon. It turned into a voyage of wonder and discovery much like the young American missionary who one bright morning in the middle of the 19th century ascended a lofty granite boulder and looked down upon the Yoruba city of Abeokuta. He wrote:


What I saw disabused my mind of many errors
in regard to Africa. The city extends along the bank of the Ogun for
nearly six miles and has a population of approximately 200.000 -
instead of being the naked, lazy savages I had been led to expect I saw a
lively industrious city. The men are builders, blacksmiths, basket
makers, hat makers, traders, barbers, tailors, farmers and workers in
leather and morocco, they make razors, swords, knives, hoes, billhooks,
axes, arrowheads and make soap, dyes, palm oil, nut oil and all native
earthen ware and many other things used in the country. It was a city
much as those I had left.

It is not strange he was surprised, no one had told him, just as I was never told, that Africa was more than Egypt and Ethiopia, that it held rich treasures of many cultures and religions.
Posted by Sabrina Gledhill at 14:01 No comments:

The oral traditions of the Lemba say that the ngoma lungundu is the Biblical wooden Ark made by Moses, and that centuries ago a small group of men began a long journey carrying it from Yemen to southern Africa.

The object went missing during the 1970s and was eventually rediscovered in Harare in 2007 by Prof Parfitt.

"Many people say that the story is far-fetched, but the oral traditions of the Lemba have been backed up by science," he says.

Posted by Sabrina Gledhill at 12:01 No comments:

African Continuities in the Americas

Posted by Sabrina Gledhill at 15:22 No comments: