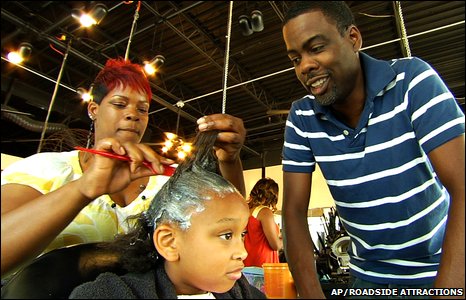 It was only after losing a huge chunk of hair that I stopped straightening it with chemical relaxer - something I had done growing up in Nigeria since the age of six.

My bald patch was dubbed the "helicopter landing pad" by my flat mates at university for months afterwards.

I share this painful anecdote because a new documentary has re-ignited the natural versus straightened hair debate among black women.

Women in Africa are no strangers to the lure of "the creamy crack", as our American counterparts call relaxer - likening it to cocaine because of its addictive nature, and are as willing to take the risk of burning their scalps using it.

"I've had my hair chemicalised for the last 10 years," Olivia told the BBC as she had her hair done in Queens Hair Designers in the Kenyan capital, Nairobi.

"It's so easy to manage because I have a lot of hair. I love it."

The most common ingredient in relaxers is sodium hydroxide or lye. In the documentary, an aluminium can dipped in a bowl containing the chemical melts completely.

But Florence, a hairdresser at Queens Hair Design, dismisses the "if you feel the burn, it's working" belief.

She says it is all about technique and places the blame for any "helicopter landing pads" squarely on too-clean or already traumatised scalps.

"Usually before I relax your hair I will ask you whether you have recently braided or washed your hair. If you have then the hair will not relax nicely," she explains.

South African Elma Titus, who specialises in African hair and scalp problems, agrees that relaxers are not solely to blame for the problem of hair loss.

"It could be the chemicals or it could be the extensions that you're putting in your hair all the time without giving your hair time to recuperate - or even the wigs," she says.

Apart from the health implications women face in search of good hair, there is the expense. Black women are said to spend about three times more on their hair than other women.

The cost of extensions and wigs can be staggering, ranging from $10 a-piece for synthetic hair to as much as $800 (£486) and upwards for human hair pieces.

Yet it does not seem to deter women bent on achieving perfect flowing locks.

Nigerian Cherish Angula admitted to the BBC's Africa Have Your Say programme that she had just spent $750 getting a lace-front wig - but she said it is money well spent.

"It lasts three, four times as long as ordinary weave-ons [extensions] and so it works out cheaper for me.

"It is basically a whole head unit, you attach it with glue around the circumference of your head and it gives it a more natural appearance like the hair is growing from your head.

"It's basically the same thing that celebrities like Beyonce wear."

What might seem like vanity to some can in fact boil down to survival for many women in Africa where careers and incomes can rely on one's hair style.

In Kenya, for example, a woman with the natural look or dreadlocks is unlikely to succeed at job interviews.

"If you really want the job you'll have to do what they want," says Judy at Queens Hair Design.

And even the thought of opting for a natural look is greeted with hilarity by the Queens Hair Design clientele.

But some women, such as journalist Phyllis Nyambura who edits a women's supplement for a Tanzanian newspaper, are trying to take on such prejudices.

"The weaves were great at first," Ms Nyambura says.

"I would change my hairstyles and look different all the time but the problem was that they are a bit expensive and there is also that fake thing about them."

For my part, I am immune to the fashion fascism, and my bad scalp days are well and truly over.

Posted by Sabrina Gledhill at 10:55 No comments: