The Disciples of Hatred, in Their Own Words and Images 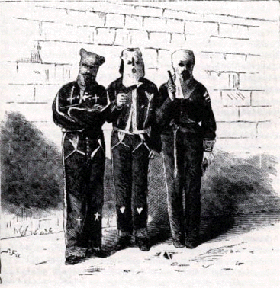 Mississippi Klansmen arrested by federal authorities
in 1871 for the attempted murder of an entire family.
By BRENT STAPLES Editorial Observer, NY Times

A lynching exhibition puts the civil rights movement in the context of the reign of terror that gripped black Southerners.

Nazi hunters have made an art of exposing war criminals through photographs taken in the death camp era. This strategy would have worked well against Southern lynch-mob killers who posed for the camera while murdering African-Americans in a campaign of terror that persisted into the mid-20th century.

Black American lives were viewed as expendable in the pre-civil rights South. The murderers who hanged, dismembered or burned black victims alive — before crowds of cheering onlookers — knew well that the law would not act against them. These savage rituals were meant to keep the black community on its knees.

The white men and women who flocked to these carnivals of death sometimes brought along young children, who were photographed no more than an arm’s length away from a mutilated corpse. These photos were often turned into grisly postcards that continued to circulate even after Congress made it illegal to mail them.

A particularly vivid lynching postcard depicts the charred and partially dismembered corpse of Jesse Washington, who was burned before a crowd of thousands in Waco, Tex., in 1916.

The card, which appears to have been written by a white spectator to his parents, is signed “your son Joe.” He refers to the horrific murder — in which the victim’s ears, fingers and sexual organs were severed — as the “barbecue we had last night.” He identifies himself in the crowd by placing a mark in ink about his head.

By permitting images like this one to move through the mail at all, the government tacitly endorsed lynching, along with the presumption that African-Americans were less than human. The mailings also aided a propaganda campaign that was intended to terrorize the black population in the nation as a whole, not just in the South.

Joe from Waco is no doubt long dead. But many of the people who attended lynchings as children in the 1930’s and 40’s must be still alive and walking the streets of the principal states of the lynching belt. They include Mississippi, Georgia, Alabama, Arkansas, Louisiana and Texas, all of which voted against the first black president.

The nearness of the past was fully evident not long ago in Atlanta, when the collectors James Allen and John Littlefield were trying to mount an exhibition of lynching images that had drawn a huge audience and international attention when shown at the New-York Historical Society’s “Without Sanctuary” exhibition of 2000.

Influential Atlantans equivocated. As a person familiar with the issue told me recently: “There were concerns that people in crowds were still alive. And of course, family members and relatives of those people might come in and have to say, ‘That’s my dad’ or ‘That’s my mom.’ ”

“Without Sanctuary” was shown in Atlanta in 2002 at the Martin Luther King Jr. National Historic Site and drew more than 175,000 people, three times as many as viewed it in New York. But the tension surrounding the exhibition made it seem unlikely that the images and the accompanying documents would find a permanent home in Georgia or any other lynching belt state.

So it came as a surprise earlier this year when the collection was acquired by Atlanta’s Center for Civil and Human Rights, an ambitious cultural and historical institution that has yet to break ground for its building and plans to open in 2011. The center aspires to emulate the Holocaust Memorial Museum in Washington in method, linking the civil rights movement to national and international issues of the day.

The notion of housing the lynching material in the same institution as, say, Martin Luther King’s sermons and speeches strikes some as jarring. But this is just as it should be. The civil rights movement can only be properly understood in the context of the reign of terror that gripped black Southerners.

The victims of those public hangings and burnings were sometimes accused of crimes. But they were often guilty of nothing more than seeking the right to vote, speaking truth to white power. Black business owners who challenged white supremacy in the marketplace were favorite targets.

The victims were sometimes killed after they had been marched through the black section of town — with a stop at the school for the colored — and fully exploited as a testament to black powerlessness. Lynching, in other words, was a method of social control.

When visitors to the Center for Civil and Human Rights confront these realities, they will know what the civil rights pioneers faced — and what they feared — when they took those first, perilous steps along the path to freedom.

Posted by Sabrina Gledhill at 10:22