Martha Putney, Historian of Blacks, Is Dead at 92 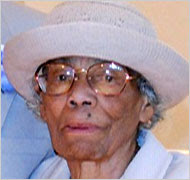 Martha S. Putney, who became one of the first black women to serve in the Women’s Army Corps during World War II and who went on to write pioneering works of history on black Americans in the military, died Dec. 11 in Washington. She was 92 and lived in Washington.

The death was confirmed by her son, William M. Putney Jr.

Mrs. Putney, whose life was featured prominently in “The Greatest Generation,” Tom Brokaw’s popular history of the war and the unsung Americans who took part in it, entered the armed services in 1943 to better her prospects in life. She left the service determined to tell the story someday of how black Americans had contributed to the war. This she did in “When the Nation Was in Need: Blacks in the Women’s Army Corps During World War II” (1992) and “Blacks in the United States Army: Portraits Through History” (2003), which she edited.

Martha Settle was born in Norristown, Pa., where her father supported his eight children as a laborer. After winning a scholarship to Howard University in Washington, she earned a bachelor’s degree in 1939 and a master’s degree in history in 1940.

Failing to find a job as a teacher in Washington’s public school system, she toiled, unhappily, as a statistical clerk with the government’s War Manpower Commission. The future looked bleak.

“My hometown offered nothing; only nonblacks were allowed to teach or work in the public schools,” Mrs. Putney told the reference work Contemporary Authors in the 1990s. “The corps, which was then less than a year old, promised an opportunity to become a commissioned officer. Though I had a master’s degree in history, I refused to go any further south for a job, so the promise of a commission was the best option available.”

The Army assigned her to its basic training center in Des Moines, where she drilled female recruits. She later commanded a unit of black medical technicians at Gardiner General Hospital in Chicago. As told in Mr. Brokaw’s book, she encountered racial barriers along the way and, with low-key persistence, pushed back against them. When the arrival of a white military band forced out the base’s black band, for example, her agitation to have it reinstated reverberated upward to the White House, where Eleanor Roosevelt intervened.

After leaving the WAC in 1946 with the rank of first lieutenant, she returned to her old government job. In 1948, she married William M. Putney, who died in 1965. She is survived by their son, of Bloomfield Hills, Mich.

Attending the University of Pennsylvania on the G.I. Bill, Mrs. Putney earned a doctorate in European history in 1955 and went on to a long teaching career at Bowie State College (now Bowie State University) in Maryland, where she was chairwoman of the history and geography department until 1974, and at Howard University in Washington, where she taught for nine years before retiring.

Her first book, “Black Sailors,” a study of black merchant seamen and whalers before the Civil War, was published in 1987. At her death, she was working on a history of black Americans in combat from the Revolutionary War to the Persian Gulf war.

Posted by Sabrina Gledhill at 16:22