CNN Editor's note: James Oliver Horton is Benjamin Banneker professor emeritus at George Washington University and a professor at the University of Hawaii. He is a member of the Abraham Lincoln Bicentennial Commission and author of "Landmarks of African American History." 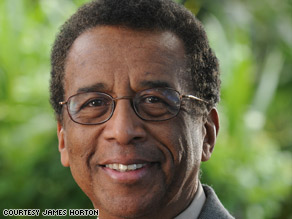 (CNN) -- Few relationships in American history have been more remarkable than that between President Abraham Lincoln and black abolitionist and former slave Frederick Douglass.

Lincoln was born a Southerner 200 years ago, on February 12, in a rough-hewn cabin near Hodgenville, Kentucky. He spent most of his adult life in the North, working a series of odd jobs before becoming a lawyer and a leading Illinois politician.

Finally, in 1860, he became the first Republican president of the United States.

Douglass escaped slavery in Maryland in 1838 and found shelter with the Underground Railroad's Vigilance Committee in New York.

He was joined there by Anna Murray, a free black woman from Maryland who had helped him escape. The couple married and soon moved to New Bedford, Massachusetts, where Douglass became deeply involved in the abolition movement and became one of its most effective anti-slavery speakers. iReport.com: Hear Douglass's descendants read Lincoln's second inaugural address

After an abolitionist lecture tour in Ireland, Scotland and England, Douglass moved his family to Rochester, New York, where he started a newspaper, The North Star. For more than 30 years, he edited a variety of newspapers that focused on issues of racial justice and equality.

Through the 1850s, Douglass became one of the most respected and influential abolitionists in the nation. His support of Lincoln's presidential candidacy in 1860 was measured and based on his pragmatic analysis of national politics at that time.

Before the election, he addressed a crowd of anti-slavery voters in Geneva, New York, most of whom were skeptical of Lincoln's qualified and relatively mild opposition to slavery.

Douglass argued that although Lincoln was not the perfect abolitionist choice for president, he was by far the best of the alternatives. Even though he understood that Lincoln was no hard-core abolitionist, he hoped that the election of a Republican to the presidency might help move the nation in an antislavery direction.

Douglass's reaction to Lincoln's presidential victory in 1860, like that of many African-Americans and abolitionists, was hopeful. "God be praised," he exclaimed.

Lincoln's reaction to Southern secession and the formation of the Confederacy encouraged Douglass and other abolitionists.

Many anticipated that a war with the slaveholding South would inevitably mean a war on slavery and an end to that inhumane institution. Douglass called the Civil War "the American Apocalypse" and argued that "not a slave should be left a slave in the returning footprints of the American army gone to put down this slaveholding rebellion."

Despite Douglass's optimism, many African-Americans lacked faith in Lincoln's administration. Their misgivings sprang from a knowledge of his pre-presidential political career.

During his unsuccessful run for the U.S. Senate seat in 1858, Lincoln faced an attempt by his Democratic opponent, Stephen A. Douglas, to portray him as an abolitionist who favored racial equality.

Understanding the potential political devastation among Illinois voters of such a charge, Lincoln defended himself with strong declarations of white supremacy.

"I am not, nor ever have been, in favor of bringing about in any way the social and political equality of the white and black races," he declared during his debate with Douglas in Charleston, Illinois.

Although he was committed to the containment of slavery, not allowing it to expand into the Western territories, Lincoln explained that he believed that the Constitution protected the slave property of Southern slaveholders.

This stand on slavery's protection deeply concerned Douglass and others who hoped that Lincoln's election might lead to its abolition.

In his first inaugural address in early March 1861, just a month after the Southern states seceded and formed the Confederacy, Lincoln sought to assure slaveholders that they had nothing to fear from his administration.

"I have no purpose, directly or indirectly, to interfere with the institution of slavery in the States where it exists," he said. He then added a personal note on the question of slavery, as he had done during the 1858 Illinois Senate race. He assured slaveholders that "I believe I have no lawful right to do so, and I have no inclination to do so."

Although Lincoln's words did not convince the South, they raised fears for Douglass and other black Americas. Early in the war Lincoln's actions exacerbated these fears as he revoked emancipation orders issued by Union Gens. John C. Freemont and David Hunter and even relieved Freemont from duty. He also disbanded the black regiment Hunter had formed.

Yet, in fall 1862, when Lincoln announced that he would emancipate the slaves of rebel slaveholders as of New Year's Day 1863, Douglass reacted immediately in the pages of Douglass's Monthly.

Though impatient with what he saw as Lincoln's "cautious, forbearing and hesitating way," Douglass announced, "we shout for joy that we live to record this righteous decree."

When the Emancipation Proclamation was announced January 1, 1863, it also authorized the recruitment of African-Americans into the Union armed forces.

Douglass agreed to recruit African-American troops but was greatly disturbed when blacks received roughly half the pay of whites at the same rank. During their first conversation in summer 1863, Lincoln and Douglass discussed this pay inequity

As Douglass recalled, he first met Lincoln in August. Later he explained to a meeting of the American Anti-Slavery Society in Philadelphia "how the president of the United States received a black man at the White House."

To great applause, he explained that the White House messenger respectfully invited him into the president's office. Lincoln rose and extended his hand as Douglass entered. "Mr. Douglass, I know you; I have read about you, and Mr. Seward [William Seward, the secretary of state] has told me about you."

Douglass explained that Lincoln "put me at ease at once."

Although Lincoln did not promise immediate action on the equal pay issue, he was clearly impressed with the service of African-American troops and seemed to agree that "ultimately they would receive the same [pay]."

Douglass left the meeting much impressed with the president, a man much like himself, sincere, self-educated and self-made. Lincoln, he believed, was worthy of "the prefix Honest" before the nickname Abe.

Lincoln's respect for Douglass encouraged a clearer anti-slavery position. In his second inaugural address after his re-election in 1864, Lincoln linked the hardships of war to the sinfulness of slavery.

Perhaps, he speculated, the Almighty would continue to punish America "until all the wealth piled by the bond-man's 250 years of unrequited toil shall be sunk and until every drop of blood drawn with the lash shall be paid by another drawn with the sword."

For Douglass, these words were further proof of "the solid gravity of [Lincoln's] character."

As a further sign of respect, Lincoln invited Douglass to the White House reception after the address, a gesture unprecedented in presidential history.

As the former slave entered the room, the president announced to his guests, "Here comes my friend Douglass." Then, taking Douglass' hand, he asked for a comment on the inaugural speech and added, "there is no man in the country whose opinion I value more than yours." Douglass complimented the speech, whereupon Lincoln thanked him.

Lincoln had dealt with other blacks during his time in the White House but never on such an equal footing as with Douglass. Both men were well aware of the significance of race for their time. Douglass was realistic in his understanding of Lincoln's racial assumptions and never regarded him as a thoroughgoing racial egalitarian.

Still, long after Lincoln's assassination in 1865, Douglass remembered his finer qualities. In 1876, President Ulysses S. Grant unveiled the Freedmen's Monument in Washington, dedicated to the memory of Abraham Lincoln. Douglass then delivered a speech gracious in its praise of the former president.

Although Lincoln "shared the prejudices common to his countrymen towards the colored race," Douglass explained to the interracial audience, his actions made him the man whose name was "near and dear to our hearts."

Then speaking directly to the African-Americans in the audience, Douglass urged gratefulness for "the vast, high and preeminent services rendered to ourselves, to our race, to our country and to the whole world by Abraham Lincoln."

This relationship between a former slave and a sitting president of the United States was unique indeed. Lincoln's wife, Mary Todd Lincoln, evidently understood the mutual respect that the two men shared. After Lincoln's death, she presented Douglass with Lincoln's favorite walking cane, saying her late husband would have wanted him to have it.

She also wrote, "I know of no one that would appreciate this more than Fred. Douglass."

Her judgment was sound, for Douglass later wrote, "She sent it to me at Rochester, and I have it in my house to-day, and expect to keep it there as long as I live."

The opinions expressed in this commentary are solely those of James Oliver Horton. The article was adapted from "Lincoln and Douglass: Hope, Ambivalence and Change" published in New York Archives, Winter, 2009

Posted by Sabrina Gledhill at 11:19