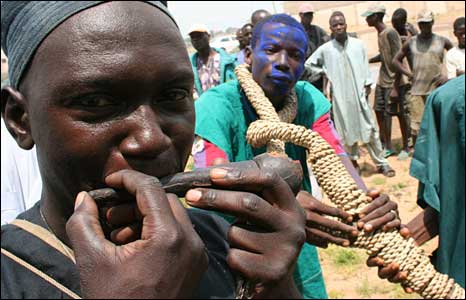 A nightly carnival where bachelors are ridiculed into getting married is under way in northern Nigeria.

Until 1 October, Kano's "Bachelor catcher" and his band of musicians will roam the streets, parading a bachelor they have caught in a noose.

The carnival is part of the celebrations of the Muslim holy month of Ramadan, where people fast during the daylight hours.

These days the bachelor is a symbolic one, chosen for the event.

But in the past the troop of drummers known as "Nalako" used to roam the streets looking for men they thought should do the decent thing and marry.

The title of Kano's "Bachelor catcher", the Sarkin Nalako, has been handed down for at least three generations, according to its current holder Auwalu Nalako.

"This is something my father did, and his father before him. It is of great importance," he says.

Auwalu's two sons will take over from him, he says.

After sunset, when Muslims break their fast, it is traditional among Kano's Hausa population for young men to go into the streets in groups and go door-to-door dancing and singing.

People give contributions of food or money.

But the Nalako group have a message to their songs.

They call bachelors "dogs" and say their prayers during Ramadan are worthless.

The Sarkin Nalako dresses up like a hunter, and his bachelor prey is paraded around with a rough noose around his neck and indigo dye smeared on his face.

Their songs are accompanied by goatskin drums and metal bells.

"Its important to encourage people to get married to avoid the immorality of having sexual intercourse with lots of people," says the Sarkin Nalako.

In Hausa tradition, a man cannot be recognised as an adult unless he is married.

Those without the means to marry are often denied respect and a voice in society.
Posted by Sabrina Gledhill at 15:23