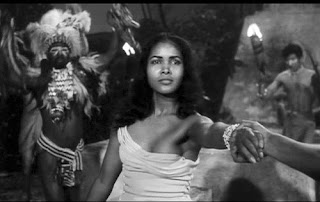 The cause was a heart attack, her daughter Dhyana Kluth said.

Ms. Dawn’s death followed by 41 days that of her “Black Orpheus” co-star, Bruno Melo, who played the title role. The family did not publicly announce the death until this week.

Directed by Marcel Camus and based on the Greek myth of Orpheus and Eurydice, “Orfeu Negro,” as it is called in Portuguese, brings together an innocent country girl, played by Ms. Dawn, and a trolley car motorman and gifted guitarist, portrayed by Mr. Melo. They meet amid the frenzy of Rio’s carnival and are soon swaying to a provocative samba among the crowds. But Eurydice is stalked by a man in a skeleton costume. Eventually, Orpheus finds her in the morgue. In the end, bearing her body in his arms, he falls to his death from a cliff.

Posted by Sabrina Gledhill at 19:58