One would think that, with all that time spent huddling in caves, Al Q's leadership would have bothered to read The Autobiography of Malcom X from beginning to end! 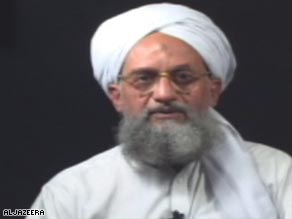 Ayman al-Zawahiri said Obama was the "direct opposite of honorable black Americans" like Malcolm X.

The imams called the recorded comments from al Qaeda second-in-command Ayman al-Zawahiri, "an insult" from people who have "historically been disconnected from the African-American community generally and Muslim African-Americans in particular."

"We find it insulting when anyone speaks for our community instead of giving us the dignity and the honor of speaking for ourselves," they said in a statement read during a news conference at the Malcolm X and Dr. Betty Shabazz Memorial, Educational and Cultural Center.

The al Qaeda statement, an 11-minute, 23-second audio message in Arabic with subtitles in English, appeared on the Internet on Wednesday. Its authenticity has not been confirmed.

The message said Obama represents the "direct opposite of honorable black Americans" like Malcolm X.

An English translation of the message used the term "house Negroes," Malcolm X's term for blacks who were subservient to whites. The term refers to slaves who worked in white masters' houses. Malcolm X said those slaves were docile compared to those who labored in the fields. iReport.com: Should Obama react to comments?

Malcolm X, the fiery African-American Muslim activist from the 1950s and 1960s, was an early member and leader of the Nation of Islam. He left that group in 1963 over disillusionment with its then-leader, Elijah Muhammed, but remained a Muslim.

After months of death threats, he was assassinated in 1965 by members of the Nation of Islam who shot him 16 times at close range. The three men who were convicted of the crime have since been paroled.

On Friday, Imam Al-Hajj Talib 'Abdur-Rashid, recalling Malcolm X's legacy, said that he "stood for human rights and the principle of self defense ... international law. He would have rejected, and we who are Muslim African-Americans leaders reject, acts of political extremism."

The Council on American-Islamic Relations (CAIR) also condemned Zawahiri's comments in a statement issued on Thursday.

"As Muslims and as Americans, we will never let terrorist groups or terror leaders falsely claim to represent us or our faith," the statement said. "We once again repudiate al Qaeda's actions, rhetoric and world view and re-state our condemnation of all forms of terrorism and religious extremism."

Go to original article
Posted by Sabrina Gledhill at 09:54