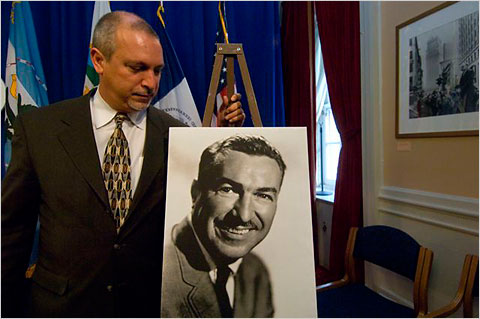 This has been a week of a wide range of activities recalling the history of Adam Clayton Powell Jr., the legendary Harlem congressman who would have turned 100 years old on Saturday.

A number of politicians, journalists and scholars will gather at the Schomburg Center for Research in Black Culture on Saturday to discuss the legacy of Powell, the first African-American elected to Congress from New York. Powell, who died in 1972, served in Congress from 1945 until 1971 and was the major black legislator of his era.

At several points over the weekend, the film “Keep the Faith, Baby,” a drama based on the life of Powell that was broadcast on Showtime in 2002, will be shown at the Schomburg.

“I think that people are still fascinated by him because he was a person who was a leader in the black community not just in New York, but all across the country,” said the congressman’s son, Adam Clayton Powell IV, an assemblyman representing East Harlem.

“He had the ability to look at the nation’s white power structure in the eye and tell him exactly what he thought,” the younger Mr. Powell said. (His half-brother, Adam Clayton Powell III, is a vice provost at the University of Southern California.)

“He was the blueprint for what all black elected officials should be: he was bold and passionate.”

Adam Clayton Powell Jr. was best known in his role as chairman of the House Committee on Education and Labor. He was a leading figure in passage of the backbone of the much of the social legislation of the Kennedy and Johnson presidencies.

He helped steer the passage of the minimum wage bill, the Manpower Development and Training Act, the antipoverty bill, and bills providing federal money for student loans and for public libraries.

Of course, the congressman had his troubles, and they made headlines throughout the country. He was criticized with increasing frequency for mismanagement of his committee’s finances and traveling at public expense. He spent a good deal of time outside the district and faced a series of troubles for his refusal to pay a judgment that resulted from a slander suit.

In 1970, he was defeated in the Democratic primary by an assemblyman named Charles B. Rangel, who has represented northern Manhattan in Congress ever since. (Mr. Rangel, too, has had his own ethical problems in recent months.)

But Mr. Rangel attended a celebration honoring his predecessor’s 100th birthday last weekend at the Waldorf-Astoria. “Mr. Rangel has been very gracious, and he’s going to come by the events at the Schomberg on Saturday,” Assemblyman Powell said. (In fact, the younger Mr. Powell challenged Mr. Rangel for his father’s old Congressional seat in 1994.)

Saturday’s discussion follows a week of other activities honoring Powell, including an event at City Hall sponsored by the City Council’s Black, Latino and Asian Caucus and another at which Gov. David A. Paterson presented a proclamation in his memory.

Assemblyman Powell said that he considered his father to have been a trailblazer. “When I look at the election of David Dinkins as mayor, with I see David Paterson as governor and when I see Barack Obama as president-elect,” Mr. Powell said, “I think that in some way my father set the stage for them.”

He added: “And with Obama about to be president, I know my father is dancing in heaven.”

Posted by Sabrina Gledhill at 22:26