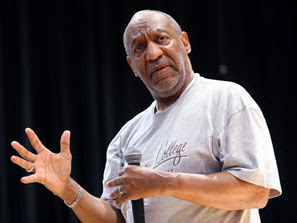 “Who is Barack Obama and what did he tell us, when he talked about his mother? What was it he was saying when he said his mother woke up, 4:30 in the morning…to correct his homework, to get it done?” Cosby asked rhetorically. “Let’s listen to Michelle Obama who talks about her father with a disease, but he doesn’t call in work and say, let me call in later. He gets up an hour earlier.”

“There are statements made which tell us, you know, that people make it because they try,” Cosby said.

Cosby brushed back the criticism that his past comments about African-Americans could be taken out of context by critics of the black community – taking a crack at Fox News commentator Sean Hannity in the process.

The former “I Spy” and “Cosby Show” star’s comments came on the eve of an appearance on NBC’s “Meet the Press.” He is scheduled to appear Sunday opposite Washington Mayor Adrian Fenty and Congresswoman Maxine Waters (D-Calif.), less than 10 days before the inauguration of the first black president.

Cosby stood by his controversial 2004 speech on the 50th anniversary of the Supreme Court’s school-integrating Brown v. Board of Education decision, in which he told the National Association for the Advancement of Colored People that stronger parenting and more supportive communities were needed to improve the condition of black Americans.

“I’m dead serious,” Cosby said. “Our children are being murdered, and they’re murdering each other, and I should not try to say something to wake people up to the fact that our children are not valuing themselves?”

“We’ve got to take the neighborhood back,” Cosby said in his headline-making 2004 address. “We have to begin to build in the neighborhood, have restaurants, have cleaners, have pharmacies, have real estate, have medical buildings – instead of trying to rob them all.”

In his WTOP appearance, Cosby also joked about Obama’s inauguration.

“By the way, I want to tell you that I think January 20 is going to be a big day,” Cosby said, adding: “However, I will make this prediction: It will still come in second, as far as big days are concerned, to the Penn Relay weekend.”

Though Cosby’s D.C. media appearances are drawing special attention because of the historic nature of Obama’s inauguration, Cosby was initially skeptical about Obama’s national appeal.

Appearing on CNN’s “Larry King Live” in October 2007, Cosby brushed back King’s question about his opinion of Obama, asking: “Do you ask white people this question?”

“How many Americans in media really take him seriously, or do they look at him like some prize brown baby?” he asked.

The entertainer is scheduled to perform at the Kennedy Center for the Performing Arts on Jan. 24.